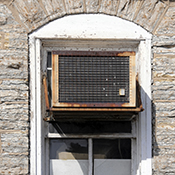 It’s that time of year again…time to open the windows, clear out the closets, and start getting your A/C serviced and ready for what’s predicted to be a long, hot Boston summer.

But before we jump ahead to Summer 2016, let’s take a look back at the history of a technology most of us couldn’t imagine living without…our good ‘ole A/C.

Can’t live without your A/C? Make sure it’s ready to hit the ground running before summer is in full swing. Contact us for AC tune-ups, AC repairs, and cooling system installations for your home!